Kirkbride Plan Hospitals for the insane, like all asylums, have complex and difficult histories. Embracing those histories, at a local community level and at a broader human scale, is critical to preserving these remarkable structures and finding new meaningful lives for their continued and sustainable use. Erasure of these immense three-dimensional historical documents and the stories they contain, by deliberate demolition or by neglect, is a form of group repression that only temporarily subdues the past. Such “forgetting” pushes distressing communal memories into our collective unconscious where they persist, influencing prejudices toward the mentally ill and breeding injustices toward one another.

One of the more challenging topics for asylum preservation and adaptive reuse is how to appropriately respect the patients who frequently died and were buried or cremated on the sites, while learning from their often tragic stories to inform and thoughtfully educate ourselves to better support mental wellbeing in the present and future.

A significant case in point is the story of Margaret Schilling, who went missing at Athens Lunatic Asylum (Athens, OH) in early December 1978, and whose corpse was not discovered until mid-January 1979. During a June 2018 visit to The Ridges (as the Athens asylum is now called, after rebranding in the 1990’s), board members from PreservationWorks had the extraordinary opportunity to tour the facilities with representatives from Ohio University and the Southeast Ohio History Center. For that opportunity we are deeply grateful, and we greatly anticipate a return visit to The Ridges for our PW 2019 conference in late June, which is in planning. A summary article of our visit, published in the SOHC’s Fall 2018 Bulletin (posted here), includes a photograph of me with Cyrus Moore, from SOHC, and George Eberts, an asylum tour guide who also had first hand experience with the discovery of Ms. Schilling’s corpse. In the photograph, I am contemplating the outline of Margaret’s body, which is permanently visible on the concrete floor; I’ve also included my own photograph in this post. 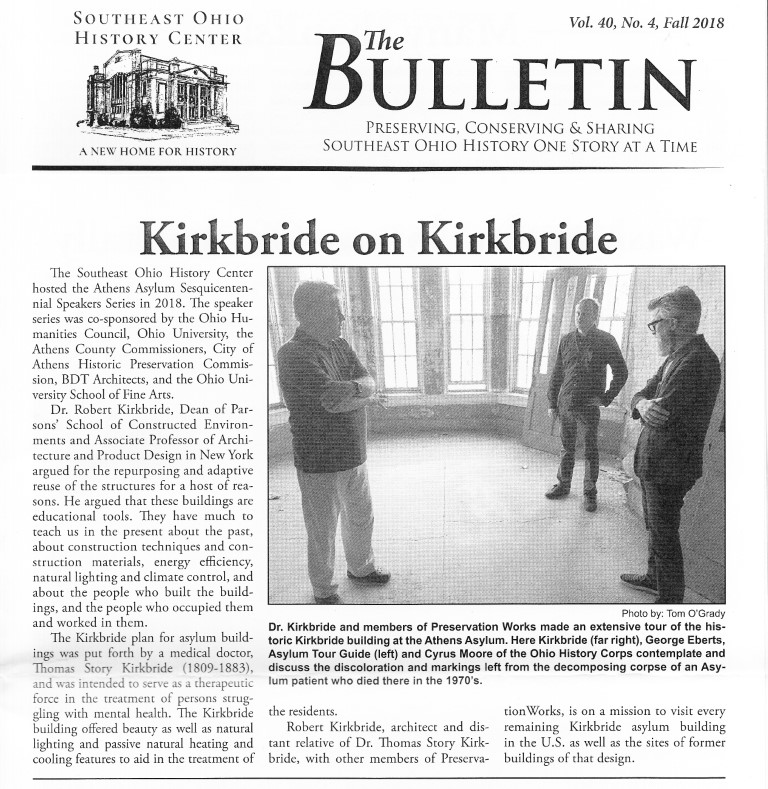 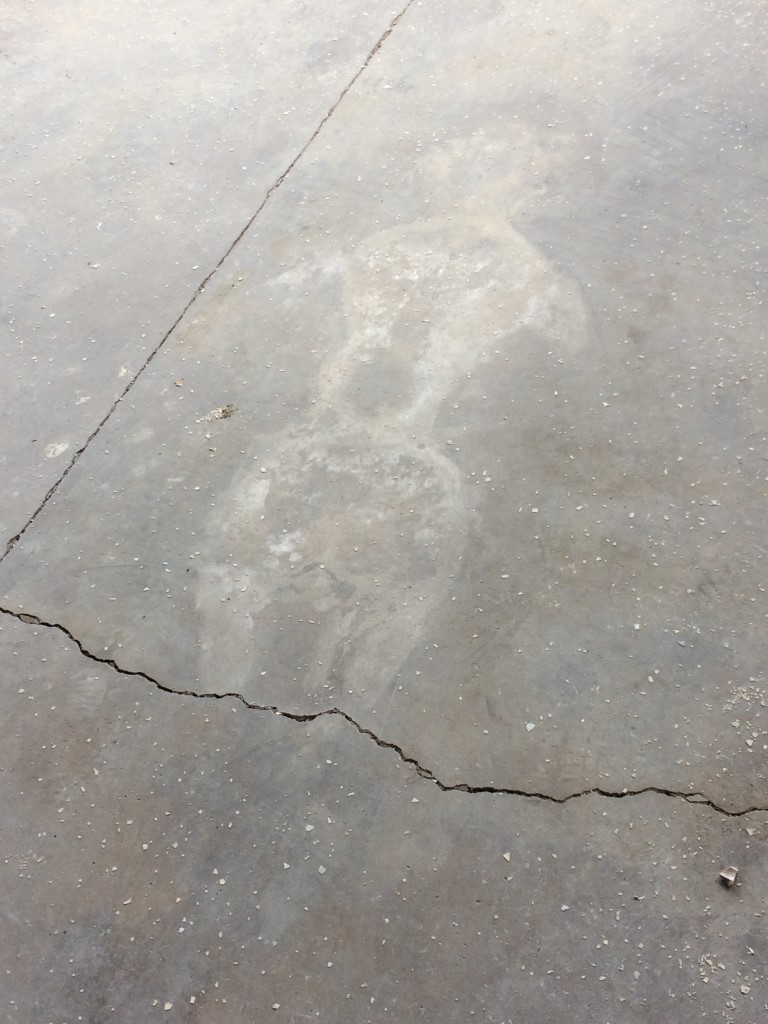 While the sight of Ms. Schilling’s trace is profoundly haunting and humbling, as Colin Dickey underscores in Ghostland (Viking: 2016), “Schilling’s manifestation is not paranormal.” Although it has “been the source of numerous ghost tales and rumors about the hospital […] a forensic team that investigated the stain in 2007 determined that the image was likely the result of the process of adipocere: the breakdown during decomposition of the body’s fat into soap” (181). This physiological transformation is akin to the famous example of the “Soap Lady,” exhibited for many years at the Mutter Museum, in Philadelphia: http://muttermuseum.org/exhibitions/the-soap-lady/ The scientific explanation of Ms. Schilling’s trace does not, however, diminish the metaphoric power of its lesson. As Dickey notes: “Herself unable to tell her tale, Margaret Schilling nonetheless managed to leave an indictment of her caretakers, a savage rebuke of the years of psychiatry that has left a deep stain on our history.”

Understandably, there is tension whether or not to provide public access to Margaret’s trace. PreservationWorks will not divulge her exact location since it is essential to prevent disrespectful trespass by any who would merely sensationalize Ms. Schilling’s unfortunate demise. Yet to sequester her trace entirely, to prevent any public access, inevitably fuels conspiracy theories that there is something to hide, and perpetuates the inclination to disrespectfully and illegally trespass. During our visit I recommended to our hosts, and my PreservationWorks colleagues present supported, the possibility of providing limited, guided access to Ms. Schilling’s resting place, which would include thoughtfully designed and informative framing didactics. Previously, I’ve written about the beautifully thoughtful design at the Cremains Memorial at Oregon State Hospital, which restores respect to those who had otherwise been abandoned by their own families, and society at large: http://thepreservationworks.org/…/visit-to-oregon-state-ho…/

Is there a way to respect Margaret Schilling’s memory while providing curated access? Whether or not there is a physiological/biological reason for Ms. Schilling’s indelible trace, it is remarkable that it persists, despite initial efforts to erase it. The encounter with Ms. Schilling’s embodied memory is deeply humbling and a haunting reminder: as a species equally capable of committing horrifying atrocities and cultivating deep empathy, we have so much more to do to better understand and support one another through the vicissitudes of human experience.