Below is Part 2 of 2 mini-reports on my recent visit to Oregon State Hospital, the oldest remaining State building in Oregon, and one of the few remaining Kirkbride Hospitals west of the Mississippi.

Prior to visiting OSH, I conveyed to preservationist Hazel Patton my eagerness to visit their Cremains Memorial, dedicated in 2014. My keen interest in the memorial stemmed from PreservationWorks’ ongoing efforts (via our statellite group, PW: Greystone Park Memorial Group) to collaborate with Morris County Historical Commission on a suitable memorial at the site of Greystone Park Psychiatric Hospital (1876-2015). As I noted in my Introduction to Rusty Tagliareni’s and Christina Mathew’s wonderful new Images of America book, Greystone Park Psychiatric Hospital:

“It is my sincere hope, and of others I represent [PW], that GPPH and its tens of thousands of physicians, staff, and patients, including those who died while in residence, are duly respected and memorialized with the salvaged remains of the building to ensure that Greystone, although erased, is not forgotten.”

At Oregon State Hospital, the cremains of former patients played an unexpected yet pivotal role in efforts to successfully preserve and adapt the original Kirkbride building, and there are many lessons to absorb from the chain of events. Since 1913, the cremains of patients who died at OSH* but were never reclaimed by their families, had been stored on site in copper canisters. [*a small proportion originated from other Oregon State institutions]

In 2004, during a visit to assess a laundry list of concerns at the hospital, state officials requested access to a brick shed that became known as the “Room of Forgotten Souls.” Inside, approximately 3500 of the canisters were discovered in a state of severe corrosion. Time, weathering and forgetfulness had combined to create a deeply disturbing tableau of institutional neglect, a striking variation on an unfortunate theme across asylums. (See, for example, Linda Stuhler’s online resource page for the inmates of Willard State Asylum.) Fortunately, on a table at the center of the room was a water-stained book with handwritten entries for the 3,423 patients who died between 1913 and 1971, and the canisters were stamped with numbers corresponding to the names listed. (Unfortunately, several years later, in 2011, researchers discovered the names of 1,566 patients, in hospital records from 1883-1913, who had been buried in an older hospital cemetery. They remain unaccounted for and are presumed lost.)

Following this discovery, a series of related articles published by The Oregonian prompted public outcry and compelled State and Hospital officials to implement the building and site improvements summarized in Part 1. As at other Kirkbride Hospitals, including Greystone, the dismay and horror of witnesses inspired creativity, and a photographic book (Maisel, 2008) and a powerful short documentary (Timoner and James, 2011) – both entitled Library of Dust – were produced, further raising public awareness to past and present failures in our mental health systems. [*received a Pulitzer Prize in 2006]

A combination of intense local advocacy, public monies (Oregon’s Percent for Art in Public Places Program) and private corporate donations (Kohler Company) converged to make an architectural memorial a reality. The wonderful host for my visit, Hazel Patton, served on the selection committee for the project. 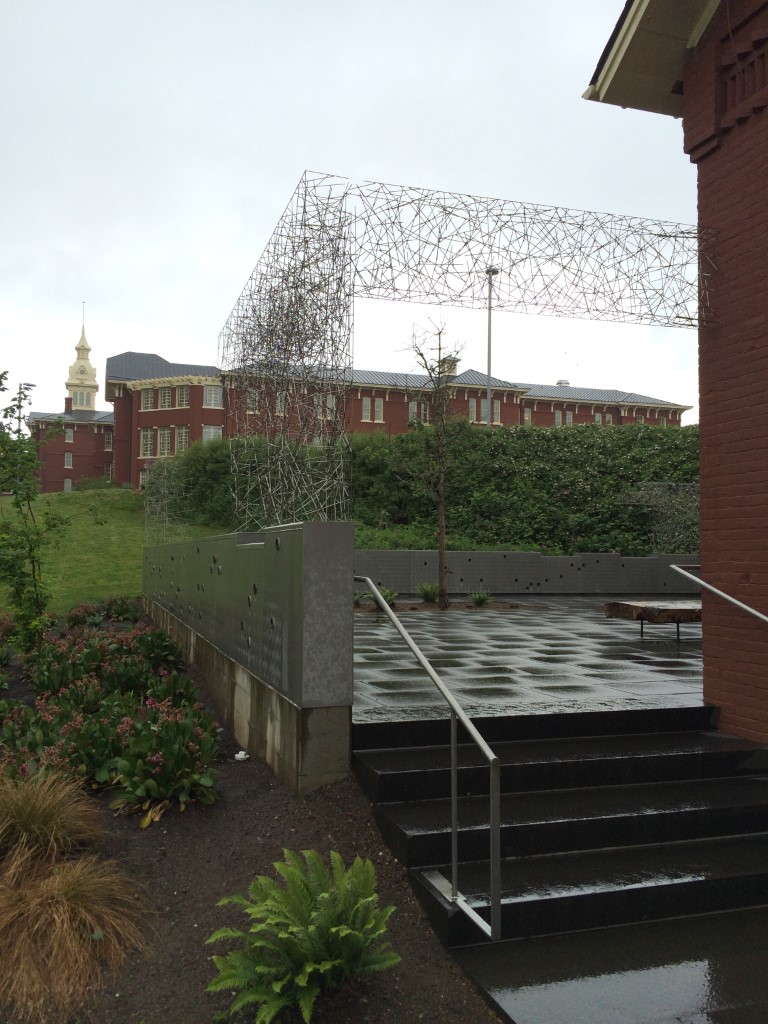 Designed by Annie Han and Daniel Mihaylo of Lead Pencil Studio, the memorial is deceptively simple, and simply stunning. A modest slate plaza is accessed down a side slope from the original Kirkbride entrance, and is separated from the new and old structures by a tremendous bank of roses. The plaza is contained on three sides by a low wall (more accurately, a columbarium) and on the fourth by a sidewall of the relocated brick shed, which had been part of the hospital’s crematorium.

This entire side wall was replaced by glass, allowing visitors to gaze from the plaza to an interior lined on 3 walls by the original emptied copper urns, stacked floor to ceiling and glowingly illuminated. Prior to installation, each individual’s ashes had been transferred from its copper canister into a new porcelain urn, donated by the Kohler Company, and embedded in the “columbarium” wall surrounding the plaza. The cover for each porcelain urn is engraved with the patient’s name, lifespan and her/his original number in the registry and on the copper urn. 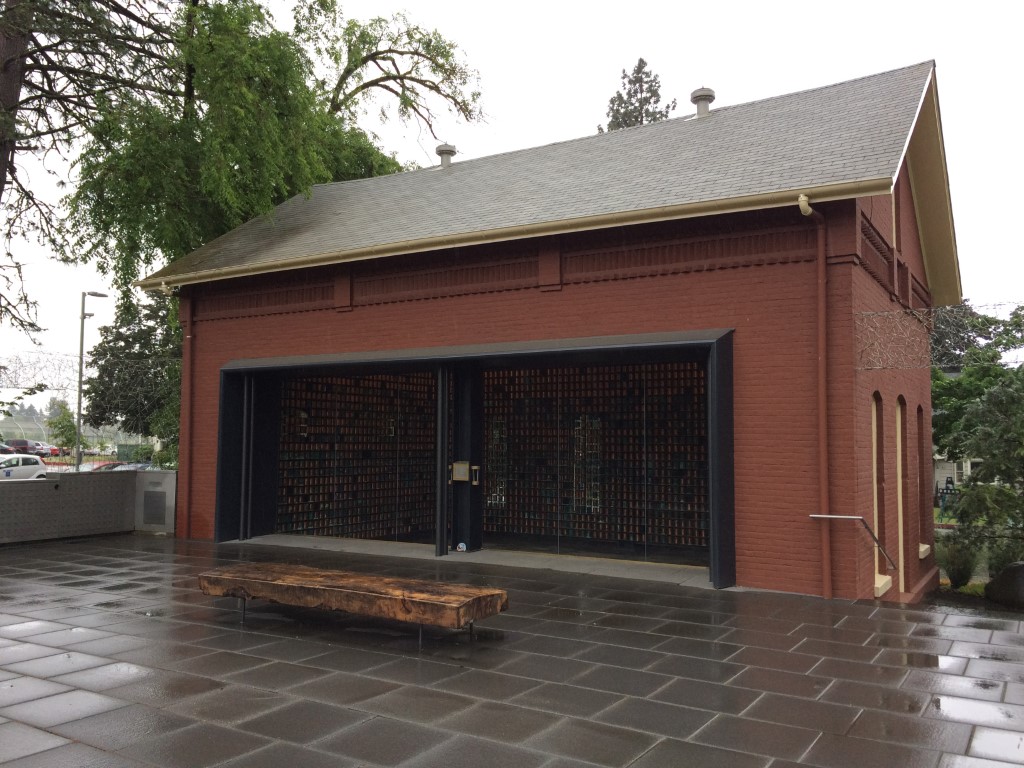 In a separate but related project, an Oregon government website provides an updated list of all names of unclaimed patients’ cremains. When a family retrieves a forsaken relative’s ashes, the porcelain urn is replaced with hollow brass tube.

The poetic is simple and profound. As the cremains of patients are retrieved – some perhaps a century after they were committed, by family members who may be several generations removed – the low columbarium wall becomes increasingly perforated and open, with each brass tube offering a reflective window from the inner court to the surrounding environment.

With remarkable dignity and restraint, the design integrates artifacts (copper/porcelain urns), buildings (the brick shed, reoriented to the original Kirkbride) and landscaping (vegetation/siting), in a manner entirely consistent with the original intent of Thomas Story Kirkbride. This is a place of contemplation and healing.

At first glance, the minimal design approach may seem stylistically different from the Kirkbride; however, not all memorials or adaptive reuse projects should be constrained to reproduce an original style as if it is frozen in time. Architecture evolves as do our personal and communal identities, reconciling contradictory and complementary layers of history and memories.

Adaptive reuse is not only for the constructed environments around us, it informs the ongoing, ever-incomplete construction sites within ourselves. 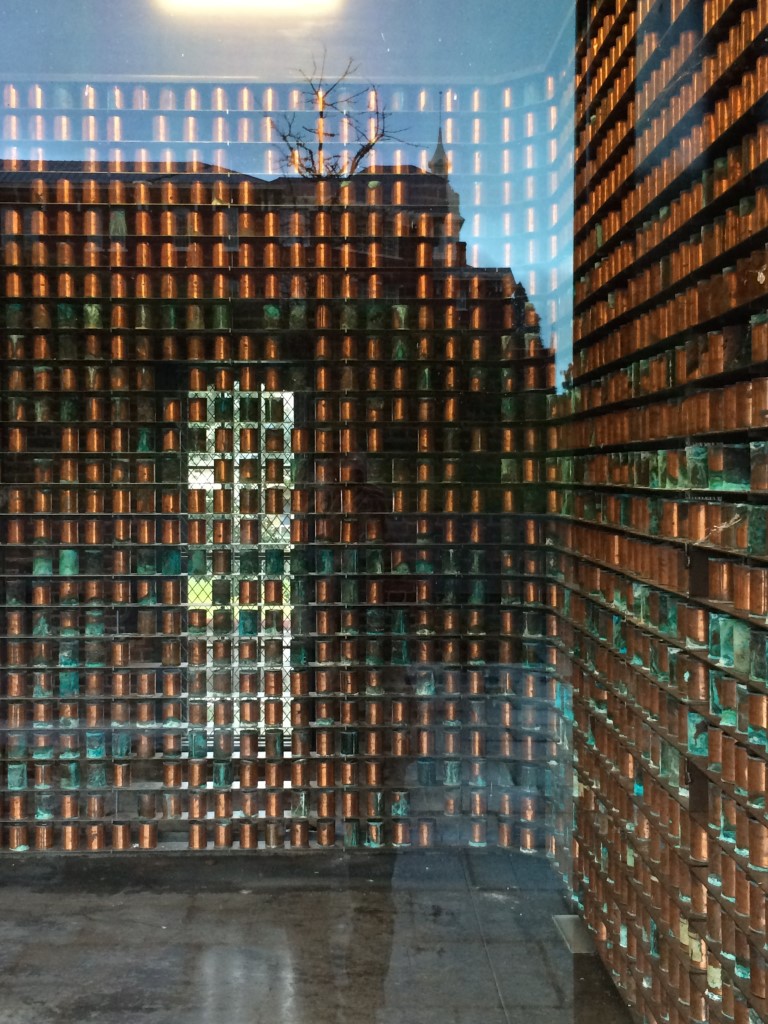 Standing at the glass wall, gazing into the transformed brick shed, with the array of three glowing walls of copper urns before us, we see also the reflection of the three new columbarium walls behind us, with the landscape and the Kirkbride beyond. The interior walls and exterior low walls are spatially and optically mirrored by the glass wall. Although the physical, literal transfer of cremains from copper to porcelain urn occurred elsewhere, we might imagine that dust passing from past to future vessels through the glass wall and through us, as witnesses of past and present.

In his 2007 Foreword to Ken Kesey’s One Flew Over the Cuckoo’s Nest, Chuck Palahniuk (Fight Club) observes that Kesey’s tale presents on one level the eternal tension of the human desires to rebel (Nicholson’s McMurphy) or to follow (Billy Bibbit):

“That’s the pattern. That’s always the pattern. But,” Palahniuk adds, “we’re never stuck with just two choices. With any luck, the rest of us will see what’s happening and choose to find a third option. Instead of reinforcing a social system by rebelling or conforming, we’ll become the Big Chief, and escape into some beautiful vision. A future that’s not a reaction to or an extension of any mental ward where we find ourselves trapped at the present moment.”

We are reminded that the bodies of those who were deposited at the asylum, by whatever seemingly sound or nefarious reasoning, passed through these artifacts and buildings and landscapes. We are reminded of our subjective and fragile notions about sanity and well-being. Examining the low columbarium wall, we observe that only some hundred or so have been retrieved by families so far, and that the rest may well remain where they are. But at the least, their remains have found a respectful perch.

The use of a columbarium, therefore, is most fitting – not merely because it is an architectural type where urns are ensconced, but because there is also a deeper meaning, a longer story. Columba is a dove, and from ancient Rome dovecotes (columbaria) were metaphoric storage places in memory training, wherein one would tuck away and preserve the everyday experiences we need to equip us to be who we believe we are, and become who we would like to be.

My experience at OSH underscores that our efforts at PreservationWorks to preserve and adaptively reuse Kirkbrides are not isolated. We are united by what we can learn and accomplish together, and we must continue to connect with the communities that are committed to supporting their local Kirkbride and respecting the memories those who might otherwise be forgotten.

CAPTION:
The dedication plaque reads: “The single empty urn above is placed in memory of 1,556 people buried in the asylum cemetery between 1883-1913 whose whereabouts are unknown. Interred in the surrounding columbarium wall are ceramic urns containing the ashes of people who passed away between 1913-1971 in State institutions, most as patients of Oregon State Hospital, and who went unclaimed by family. Within the 1896 brick building are empty metal urns preserved in the state of their public discovery in 2004.”