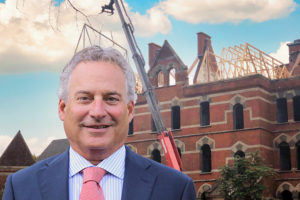 What do you consider to be unique about your specific building compared to other Kirkbrides?

All of the Kirkbride structures have their place in history and each is unique in its own way. Here in the Town of Poughkeepsie, our “Kirkbride” is an impressive High Victorian Gothic building situated on the site of the former Hudson River State Hospital and its magnificent architecture has long been admired by hospital staff, visitors and members of the community. The Kirkbride Administrative Building is the centerpiece of a massive structure, with the north and south wing connected, making it over several hundred thousand square feet. The Kirkbride and other structures here are set against the backdrop of the majestic Hudson River and the property offers spectacular views and beautiful grounds designed by Frederick Law Olmsted and Calvert Vaux, who designed Central Park in Manhattan. Historians cite the property’s long association with the Roosevelt family –James Roosevelt, FDR’s father, sold his Mt. Hope property in 1866 to New York State for what was to become the hospital campus. In 1960, former First Lady Eleanor Roosevelt gave the commencement speech to the hospital’s School of Nursing graduating class; the final graduation was held in 1977. We have been consulting with the town’s Historic Preservation Commission to preserve artifacts and incorporate elements of the original architecture into our Hudson Heritage mixed-use community being developed here on 156 acres on Route 9, across from Marist College. The $300 million project will include housing, a hotel and conference center, retail, a supermarket, restaurants, entertainment, and medical and office space.

What has been your greatest challenge in preservation?

The Kirkbride Administrative Building was severely damaged by fire in 2018, so this is a significant restoration and requires tremendous attention to detail. We had the unique requirement to rebuild the entire upper floor, trusses and roof structure, which entailed completing as-built studies for every inch of the building and façade. We’re installing more than 360 windows and a new roof, all in keeping with the original architecture. We intend for the restored Kirkbride to serve as a dominant structure overlooking the Great Lawn designed by Frederick Law Olmsted and Calvert Vaux, as it has in previous decades.

How did your community react to the idea of restoration, and did their reactions change after completion of the project?

We have been especially sensitive to the site’s significance and have met with former hospital staff, historians and community members to share our plans and invite ideas and suggestions. There are many memories attached to this site, and the community is thrilled to see the building coming back to life. We will continue our efforts to preserve its significance and respect its celebrated past as we restore the Kirkbride and other structures and re-use architectural elements of the past in the architecture of the new. Hudson Heritage is being designed as an intergenerational community with 750 residential units, including assisted-living. The property will feature a 150-room hotel and conference center; 350,000 square feet of commercial and retail space, shops, restaurants, and a fitness center; 40,000 square feet of urgent and primary care medical facility/office space; a 24,700-square-foot education/performing arts center; walking trails and more than 60 acres of open parkland.

What drove your decision for restoration vs demolition and what was the short-and long-term financial impact?

The Kirkbride is a piece of history, so demolition was not a consideration for us. The financial impact of restoring the Kirkbride building could never, on its own, make financial sense. It is done with a sense of history and its importance to the overall property’s development. Of course, we must always take into account the safety of our workers and the community at large. We have worked with engineers and municipal officials to ensure the structural integrity of the Kirkbride and other buildings we are restoring. Many of the other buildings, however, are structurally unsound and needed to be razed for safety purposes.

What is unique about your preservation efforts vs what is being done with similar projects elsewhere?

We are always sensitive to maintaining integrity. In addition to preserving physical structures, we also believe in preserving the historic significance of the site on which they are situated. We take a holistic approach, to restore those structures that can be restored and to incorporate unique architectural elements from other structures into our new designs.

We recognize that many buildings and sites have historic significance and we believe in making every effort to preserve as much of a property as feasible. These structures hold stories to the past so, while we are building for the future, we believe in smart development that embodies key elements of local history.

We were fortunate to have this magnificent structure located on the site of our planned mixed-use Hudson Heritage community. We appreciate the beauty of the architecture on the former hospital campus, which was designed as part of a treatment philosophy to incorporate aesthetics and natural beauty into care of the mentally ill. The Kirkbride, designed by Vaux, Withers & Co., is, of course, named after Philadelphia doctor Thomas Story Kirkbride, who believed the environment played a key role in treatment. In addition to the Kirkbride, EFG/Saber Heritage is preserving five other buildings for adaptive reuse and restoring the Great Lawn.

Would you be interested in supporting a museum exchange among Kirkbrides that enables exhibition materials, artifacts and ephemera to travel among participating Kirkbrides?